According to Inform Risk Index, among the countries that are expected to suffer the most due to Climate Change throughout the world, Pakistan has been ranked at 18th, in 2019. Apart from the socioeconomic instability, the country’s susceptibility to face any natural disasters, is the key factor causing this risk.

Global Warming and Its Components

According to Environmentalists, countries that are facing the consequences of choices made by the developed countries, in actuality, have little to do with it. Their consumption of non-renewable resources is very less as compared to developed countries. Although an official study is still being conducted to determine if this Climate Change was the definite cause of this calamity or not.

A Calamity of Unprecedented Events

The country’s Climate Minister, Sherry Rehman stated that “it’s been a catastrophe of unprecedented levels.” She mentioned that the heavy monsoon rains are expected every year in Pakistan but this time, it was at least three times more than the usual spells. Moreover, she also said that generally, these spells are scattered in 2-3 months long time and the waters get cleared during these breaks in between.

It has been approximately an eight-week long spell, yet the country is expecting one more inundation in September. A rise of 400% has been seen in areas like Baluchistan and Sindh and at least 20 dams were breached as well.

Although, the continuous rainfalls have left the residents of the country helpless in such horrendous scenario however, the climate change, if it is, may not be the only cause of these extreme conditions. Pakistan is expected to receive the monsoon rainfalls every year. Nonetheless, the downpour does not usually last for more than a week, unlike this year.

Moreover, the presence of glaciers outside the Polar regions of the country are also contributing in making the situation worse because of the extreme heat situation in the region. This heat accelerates the glacier melting process thus, becoming another cause of these floods. 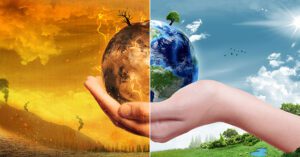 Citizens and the Disaster Management Authorities

The disaster that the country is facing was inevitable to a certain extend due to the reasons stated earlier. However, one thing that is noteworthy is the spirits of the citizens. People of Pakistan have gotten out of their own homes in order to provide aid to those who are suffering.

Different NGO’s, well-known celebrities, designers, big companies, and even the children selling small articles on the streets are also trying to help in any capacity.

Furthermore, a lot of countries have also made huge monetary contributions to help Pakistan manage the crisis.

Recently, a heat wave had been observed in a few other regions including China, UK, etc. Nonetheless, these states are well-developed and have the resources to manage such extreme situations.

Countries like US, have been reported to show the highest consumption rate of fossil fuels on a daily basis yet there is no prediction about them facing any major crisis like a few of the third world countries are.

Conclusively, it can be said that the Third World Countries are expected to pay the price for the Developed Countries and their consumption of non-renewable resources.