Gilgit-Baltistan, also referred as the Northern Areas of Pakistan, has some of the tallest mountains in the world. The area transforms into a refuge for nature lovers and an adventurer’s dream when you combine them with boundless expanses of verdant meadows, deep valleys, stunning waterfalls, and hazardous routes. Skardu, one of the other important cities in this region, is a popular tourist destination, all thanks to its stunning glaciers, museums, forts, and resorts.

Gilgit-Baltistan has three districts with additional sub-districts in each. Gilgit District, Baltistan District, and Diamer District are the three major districts. The subdistricts of Hunza, Nagar, Gilgit, and Ghizer make up the Gilgit District. Astore and Diamer are the sub-divisions that make up the Diamer District. Shigar, Ghanche, Skardu, and Kharmang are all included in the Baltistan District as sub-districts. One of the sub-districts of Gilgit now has the world’s highest natural cricket stadium built in the attractive valley. 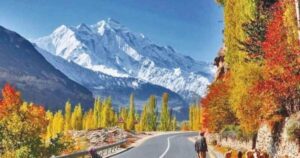 The world’s highest natural cricket stadium built in the Pakistan’s picturesque Gilgit-Baltistan region was inaugurated on Saturday. It is named “Pissan Cricket Stadium,” and is located in Nagar Valley. Additionally, summertime weather would be ideal for cricket there, as it at 8,500 feet above sea level.

The stadium, for which a three-kilometer-long road has also been constructed, was officially launched by the local political party. At this Pissan Cricket Stadium, cricket will be played under the majestic view of Rakaposhi, Nagar GB, adding to the joy of the game. 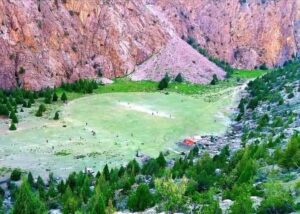 At the stadium, teams from Diamer and Nagar played their opening match, where provincial minister Fateh Ullah Khan was also present as the special guest.

By holding Nagar team to 71 runs, as Diamer attempted to reach the 161-run goal, the squad won the T20 match by 9 wickets.

The administration of Gilgit-Baltistan intends to foster stadium culture in order to develop indigenous cricket talent in GB, according to Chief Secretary Gilgit-Baltistan Mohyuddin Ahmad Wani.

“We anticipate that athletes from this area will compete for Pakistan in international competitions. We also aim to develop the region’s tourism potential, which will boost local communities’ economies and provide jobs for residents just outside their doors,” he continued speaking about the event.

In February 2021, breath-taking photos of the Pissan ground became popular on social media, as prompting the decision to build a cricket stadium, as a consequence.

Cricket played in the mountains of Rakaposhi will definitely be a treat for all cricket lovers. Tourists present at the inauguration of Pissan Cricket Stadium also expressed their gratitude to the government of Gilgit-Baltistan for offering such healthy activities for people of the area and also for the outside visitors.

This Stadium will not only bring in another attraction for tourists but also prove to be a great opportunity for the locals. A number of jobs will be created in order to start matches in the stadium. Thus, generating jobs for the people of the area. Furthermore, as the tourism will increase, government will be forced to look into the development of the area at priority basis.